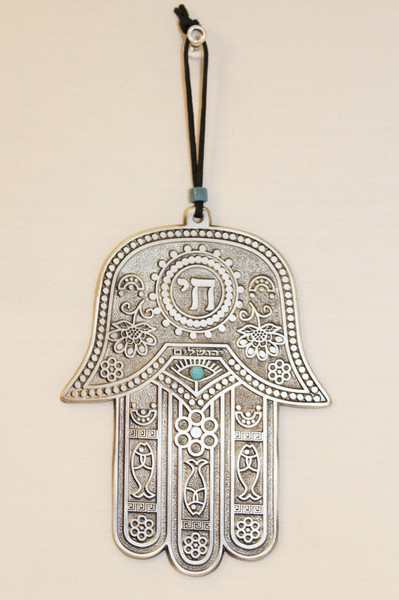 On this Hand you can see these symbols:

FISH - symbolizes "food", or promise of God, that regardless what is happening in our life, He will always provide us;

CHAI - it is a Hebrew letter that means "life";

EYE - it will watch after you and protect you;

The fear of the evil eye has been ongoing since prehistoric times. It represents the fear of those destructive energies that arises from negative emotions, like jealousy hatred and envy. Many early cultures adopted the eye as an icon for their protection, others used Hamsa and so over time the most popular universal symbol became an eye placed in the palm of a hand. The power of the eye inserted into Hamsa combined their power and introduced the idea of obtaining a more powerful talisman by combining the power of two.

Hamsa with Evil Eye regarded as antidote to the negative energies, which is fear of human beings throughout history.

Historically a wide geographic area, included the Middle East, considered the Hamsa sacred hand symbol as the symbol of God's hand in the earth. It helped to make them feel the existence of God in everything and in every new formation. The Hamsa amulet was seen as the symbol of holiness, healing and miracles, which would pull the forces of good to the bearer and protect them from unseen dangers, disease, and neutralize the negative energies of envy and the forces of evil.

Place it in your home where the guests can see in the moment they enter. As there is a widespread belief that it will protect the house and household from disasters primarily fire.